“People don’t lock their cars around here. But the bears learned how to push the lever on the front door of my house, so I keep that door locked.”

These were the words of the local schoolteacher in Ovando, Montana, 51 miles east of Missoula. I was definitely far from home. 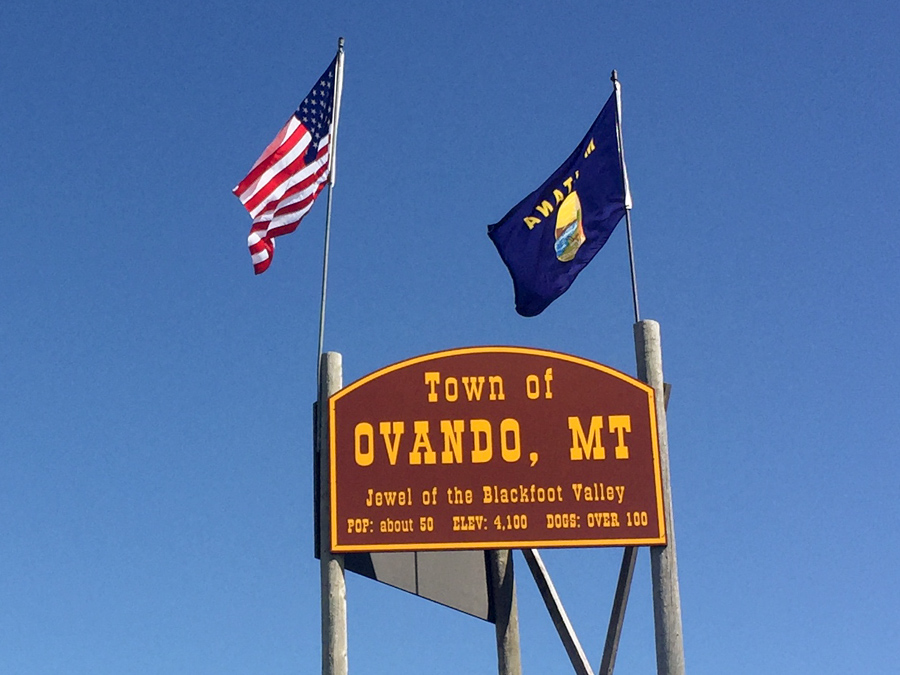 On May 10th, 2016, I started my cross-country kNOw THEM America Bicycle Trip in Astoria, Oregon: a physical challenge, bucket list item, and opportunity to see parts of America I’ve never seen—in connection with the kNOw THEM Initiative. The initiative combats the most dangerous four letter word in the English language—“THEM” which creates the “other,” stereotypes, and conflict.

After cycling over 700 miles through Oregon, Washington, Idaho, and Montana, I had entered the part of the country my friends referred to as “the middle of nowhere.” Fellow cross-country cyclists shared the same opinion. “Nothing’s there,” they warned me. 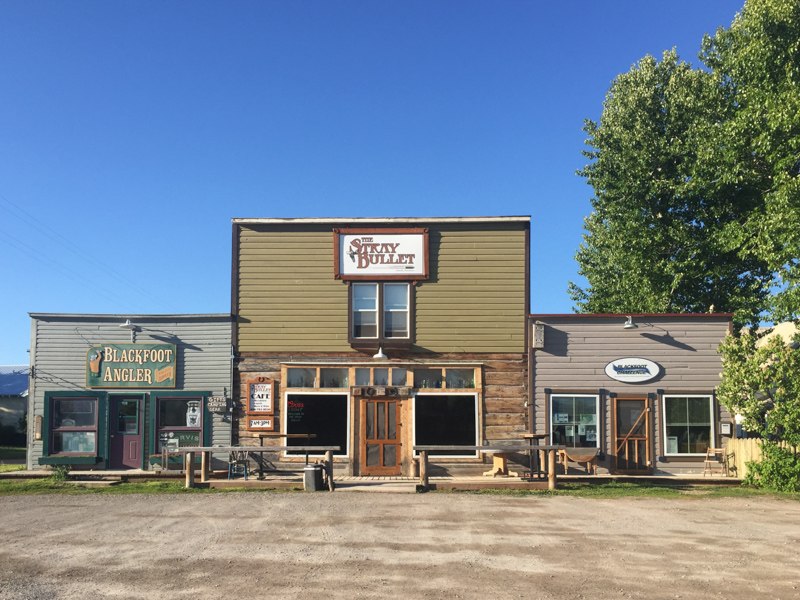 On Memorial Day I rode half a mile off Route 200 and pulled up to the Ovando Inn and Blackfoot Trading Company, where I would spend the night. With a population of just 81 (or 82, depending on who you ask), Ovando, Montana is so small that there isn’t an official sign off the highway—you just have to know where to turn.

Ovando’s main square, mostly empty except for a few scattered tumbleweeds, appeared like a scene from an old Western movie. The Inn’s owner rented four rooms over an ice cream shop and gift store that sold huckleberry ice cream (a local specialty) and political parody t-shirts.

The next morning I crossed the plaza to the Stray Bullet Café for breakfast – oatmeal and an omelet – before continuing my journey. Colleen, the owner of the cafe, was restocking ingredients at the nearest Costco—50 miles away in Missoula, Montana. Colleen’s mother Elouise, the town’s 80-year-old former postmistress, was filling in for the morning. 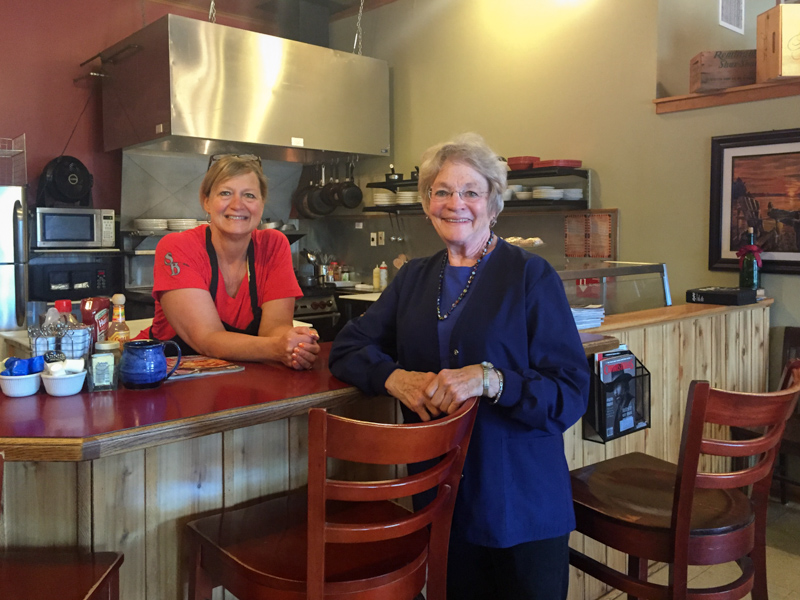 Before I left on my cycling trip, I had planned to film short interviews with locals for a partner project, No Labels, a bi-partisan organization that aims to break the completely dysfunctional polarizing political gridlock in Washington, DC. After ordering my breakfast, I struck up a conversation with Elouise. I hoped this would turn into an eye opening discussion on political views. I often share my getting-to-know-the-“other” conversations as part of my kNOw THEM Initiative.

“It’s an interesting time to be traveling across the country, especially with all the political stuff that’s going on,” I prompted.

“Here in Ovando we live in a cocoon, and we like it that way. Everyone pretty much knows how each other thinks. We’d rather get along, though, so we just don’t talk about politics,” Elouise said.

This was a first. Most of the people I’d met along the way had always been interested in sharing the local perspective – sometimes adamantly. What kind of “cocoon” could be worth avoiding open conversations?

But Elouise, and presumably the other Ovando residents, didn’t see it that way. Rather than focusing on differences, they liked to work alongside each other, preserving their values and keeping the peace within their “cocoon”.

“We like to be able to celebrate what we’re proud of. In our school, we say the pledge of allegiance every day, because we’re all proud of our country,” Elouise told me. I realized that the t-shirts in the gift shop weren’t quite as tongue-in-cheek as I initially assumed.

“We have a really good school,” Elouise said. The school is K through 8, with nine students total, but no one will be in eighth grade for the next two years. After students graduate from the eighth grade, families choose where to send their kids. Many choose the 20-mile drive followed by a 30-mile bus ride to the high school in Missoula.

“We love our way of life, but there’s really not much to keep the kids here,” Elouise told me.

Almost everyone in Ovando is a rancher. The original population settled here during the Homestead days in the 19th century, driven by new railroads and economic opportunity.

The advent of large-scale industrial agriculture in the past few decades forced many ranchers to sell their farms to big corporations, and the population in the area dropped dramatically. About ten years ago, as the population shrunk and business owners aged and passed away, many of the businesses in town started going up for sale. The new owners still struggled, and those same businesses are up for sale again just a few years later. The town today has a couple of restaurants, an old jailhouse, a gas station with an above-ground gas tank attached to the Inn, and Blackfoot Angler, a fishing supply store.

It’s tough to make a living in this part of America if you don’t raise cattle. It’s too dry for most farming agriculture and there are just 28 frost-free days per year to grow vegetables. Sometimes, it snows on the 4th of July. 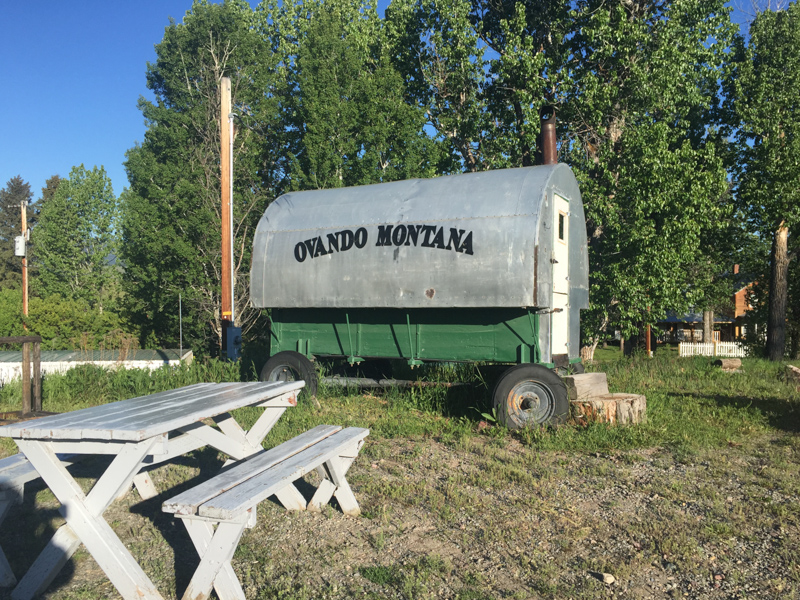 Outside forces have been affecting Ovando, too.

The Resort at Paws Up, a recently-opened dude ranch near Ovando, charges $1,500+/night for a private ‘glamping’ experience that includes activities from fly fishing to paintball to cattle driving. After construction, the ranch failed to pay its local contractors. “They assumed they had so much money that they were untouchable. That didn’t go down well here,” she said. “The dude ranch closed up its septic and water systems before the official inspection. That didn’t sit well with local inspectors, and they delayed the resort’s opening by three months.”

“They irrigate because it looks pretty in the summer. But all the ranchers have an agreement; we don’t irrigate in the summer in order to preserve the river so the fish can survive the summer,” Elouise explained. “Water rights are a big deal here.”

Throughout our conversation a TV set behind the counter played Fox News, cycling through the same horrifying images from the latest terror incident. Sitting in the Stray Bullet, I could understand how easy it would be to see the world outside Ovando’s “cocoon” as a dangerous place—to “THEM-ify” the rest of the world.

But it’s not just the other side of the world that Elouise had been indoctrinated to fear. Fear is a funny thing, dangerous and pernicious: False Expectations Appearing Real. Once in place, it’s difficult to unseat. 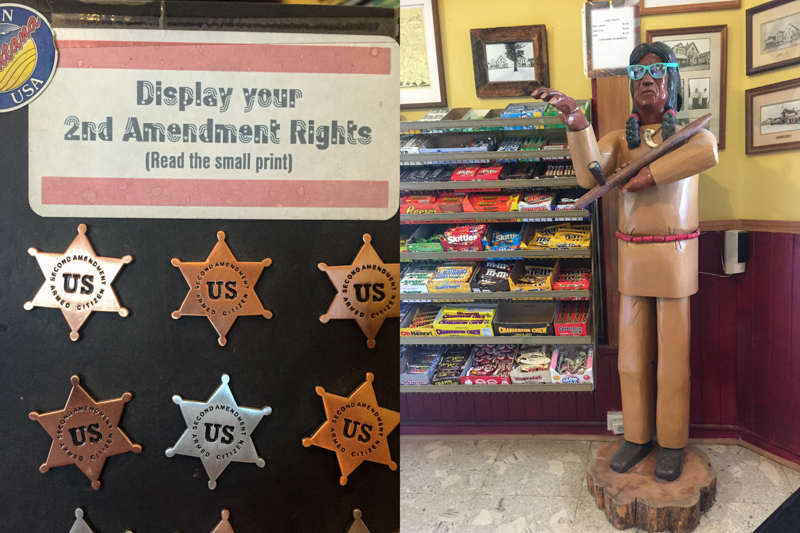 Elouise, like most of her neighbors, had lived in Ovando her entire life—her ancestors were homesteaders, and had ranched there for generations. When her kids were young, Elouise would send them out to play all day, often with her .22 rifle to hunt gophers. Today, she never lets her grandkids out like that, so they won’t get hurt by bears or mountain lions. Only recently had she been programmed to fear.

As I finished breakfast and headed back to Route 200 to continue my quest, I reflected on my experiences in this truly tiny town. So easy to miss from the highway—even at a slower pace on my bike—I would never have stopped in a place like Ovando if I hadn’t taken this journey.

Elouise had refused to participate in a video interview, almost cutting off the conversation when I mentioned recording—she preferred to keep her opinions private. Instead of using our conversation to change others’ perspectives, I had broken down one of my own prejudices—one I didn’t even know I had. I tend to think of “them” as people on the opposite side of a conflict, or those who I disagree with on political issues. Based on my understanding of this area’s politics I had assumed that I would need to tackle our differences head-on.

But it had never occurred to me that my belief that we were so different could be contributing to the problem. I had made assumptions about the people in this part of the country without bothering to look past our surface-level political differences, and in doing so, I had THEMified and almost missed the Ovando “cocoon.”

Though Elouise and I probably didn’t see eye to eye on many political issues, I didn’t need to address those differences head on to break down the barrier between her world and mine. For the rest of my ride I would explore my similarities, rather than my differences, with the people I met—especially those I assumed were so different from me.